Edgar Park posted a message on the Crosthwaite and Lyth website recently. This led to him sharing some fascinating stories about growing up as a child in Crosthwaite and about his parents, Edgar and Maud.

I visited Crosthwaite Church on a trip down memory lane as my father Edgar and mother Maud were married in the church on the 14th April 1945. My mother said she wanted her wedding day when the pear blossom was out at Broad Oak. My mother was a Land Girl with Harry and Eleanor Dobson of Broad Oak Farm, from where she left in her wedding dress that she had made by candle light, for the church. My father worked on a farm in the area and was one of the Lakeland Park family, I believe related to the Walling family. We fell on hard times for a short period after work with a tied house ceased, and the Dobsons were so kind to take us in until my father found work in Cumberland. Tommy Walling used to use his cattle wagon to move our furniture etc. 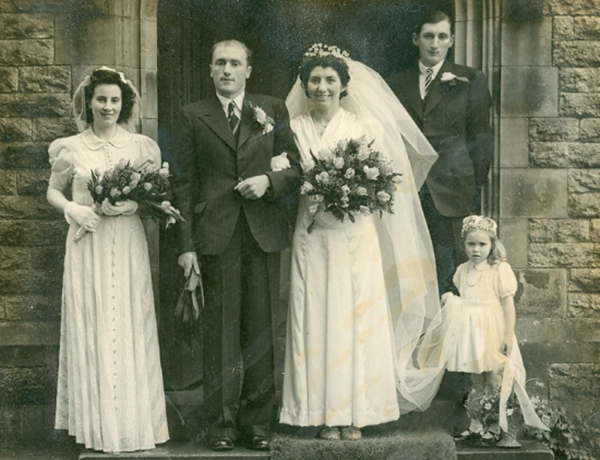 My youngest daughter visited the church last year and told me a member of Walling family now has the pub. It’s the third time she has visited and had hoped to meet Matthew Dobson whilst there but ran out of time with the prospect of a long drive home to Lincolnshire. I was astonished the other day when I looked up the Park name and the Westmorland Gazette front page come up with an archive wedding picture which was my mother and father on the steps of the church with Land Girls forming an arch over them with muck forks, though the newspaper caption shows the wrong month. Crosthwaite... wonderful place.... wonderful people.

The ashes of my father Edgar came to Crosthwaite four or five years ago, and I brought my mother Maud along with them too. I know my daughter Debbie had been in touch with Matthew regarding the ashes prior to our visit. My mother lived on for many years after that in Carlisle, and I used to drive over from Northumberland each week to help her out, and every day when she was in hospital.

I was very young when at Broad Oak, and went to school with Thomas for a short while on one of those old buses with a wagon front and the door at the back. Eleanor and Harry were very kind to us and we lived in the attic with our furniture crammed in the hallway. The house smelled lovely in the morning of porridge from a pot swung over the range fire followed by the smell of bacon frying. Harry used to sit at the head of the table, and I remember he had a very wide leather belt with a big buckle to hold his trousers up and a battered felt hat, although Thomas wore a felt hat nearly all the time too. The water was drawn from a well pump into a bowl standing in a sandstone trough in the scullery behind the kitchen. Eleanor kept bees and I always remembered the honey, so much so that I eventually became a beekeeper too.

I think we were moved out of a tied house on a farm near Leeds because my father caught Anthrax from a farm drain. So, after a long stint in the isolation hospital, he was not well enough to do the heavy farm work, but he did make a good recovery and got back to strength again. The stay at Broad Oak was a God-send to us and frankly saved our bacon I think.

My mother Maud absolutely loved the Lyth valley and we used to come over to the church from near Carlisle for the Easter service and meet up with Eleanor and Harry. As a Land Girl she spent a lot of time with the horses including taking them to the smithy for shoes etc. She always talked about making her own wedding dress by candle light at Broad Oak, and believe it or not she kept the dress all her married life, and it is now looked after by my youngest daughter Debbie who lives in Lincolnshire. She works in food research and development and her partner is the chap who flies the WW2 Spitfire and the Hurricane for the RAF at the events and special occasions. He also flew the Typhoon you might have seen behind the Spitfire over the Palace for the Royal celebrations. He is now one of the senior ranks running the Battle of Britain Memorial Flight, so he gets to play with big toys.

Our eldest daughter Amanda, a really good artist, was a senior graphic designer for Sage software, and now is married with two little girls, and helps her husband run their building business in Northumberland only three miles from our home. She has a busy life.

My brother Robert, I believe, still knows Emma Dobson as he lives in Market Drayton Shropshire, but we don't know where Middleton and Margaret went after leaving home. I was sorry to hear that Thomas had died, which was awful, but heartened to see his son is now running the farm. Funnily, just today my sister, Helen, rang from Somerset where she used to work for Westland Helicopters prior to retirement, and was asking about Middleton when we were talking about Lyth and our relatives in the area. My wife, Alison, is doing the family tree of the Park family, so very interesting to go back generations in the Lyth area. I must admit, she is getting a bit stuck with tracing the connection to Mislet where I think Gardeners or Gardiners used to farm (I think Wallings may have it now). However, I have seen the information and pictures of said family at Spout House. All very interesting.

Frankly, I think my mother must have been made of strong stuff as she was uprooted by the war from quite a comfortable middle class lifestyle, being the youngest daughter of the well known Southern family, who owned the Manchester Central Laundry and had been part of the consortium that built the Manchester Ship Canal. The first ship to use the new canal was carrying timber from Canada for the Southern family timber yards, which eventually became Magnet and Southern and now I think Howdens Joinery. I digress; what I was going to say was that my mother moved from all mod cons and comfort of the city to the rough and tumble of the Land Army and farm life. After meeting my father and marrying, the tied farm cottages were basic to the extreme. They were cold and damp and the only running water was down the walls. Even the toilet was outside and in some cases an earth closet. It was warmer in the cow sheds. 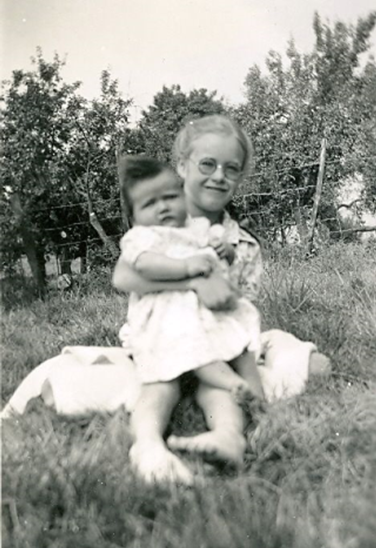 I have also contributed two photographs we still have of the Dobson family when they were young. One photo is of Emma with Margaret on her knee and the other picture is of all five children – the five “M‟s. Margaret was my mother’s bridesmaid. Incidentally, when Eleanor used to visit our family near Carlisle she used to drive a big black car with a split rear window. She used to come all the way over Shap with a wooden cloths peg wedged to hold the choke button out on the dash or the car would conk out. What a woman! 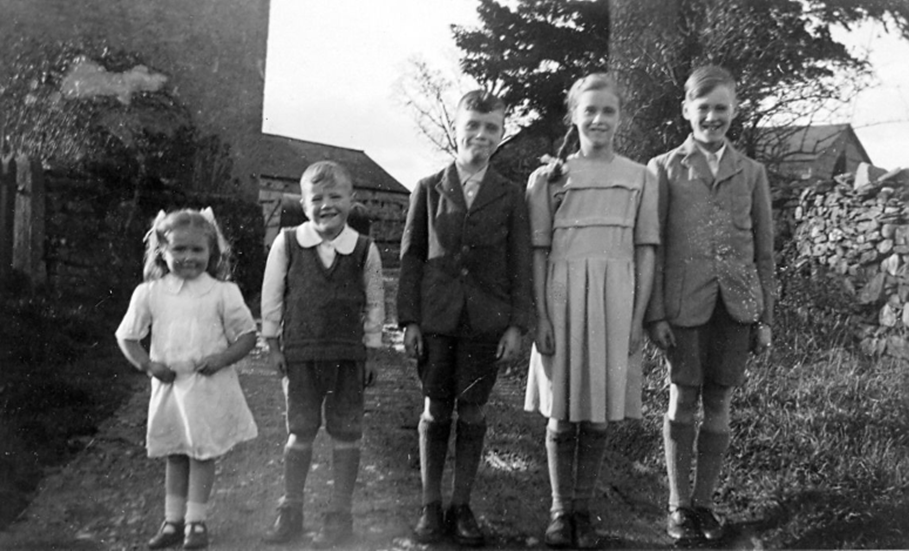