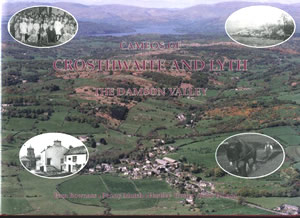 The Punch Bowl Inn sits next to the Church, as do many country inns. When the 1829 History, Directory and Gazeteer of Cumberland and Westmorland was published, Thomas Richard lived at the Punch Bowl Inn. He was described as a "victualler and blacksmith". Later in the 1881 Census Thomas Cannon was the landlord. He was a farmer of 12 acres and an innkeeper. His daughter, Agnes, just 15 years old, was working as a barmaid. 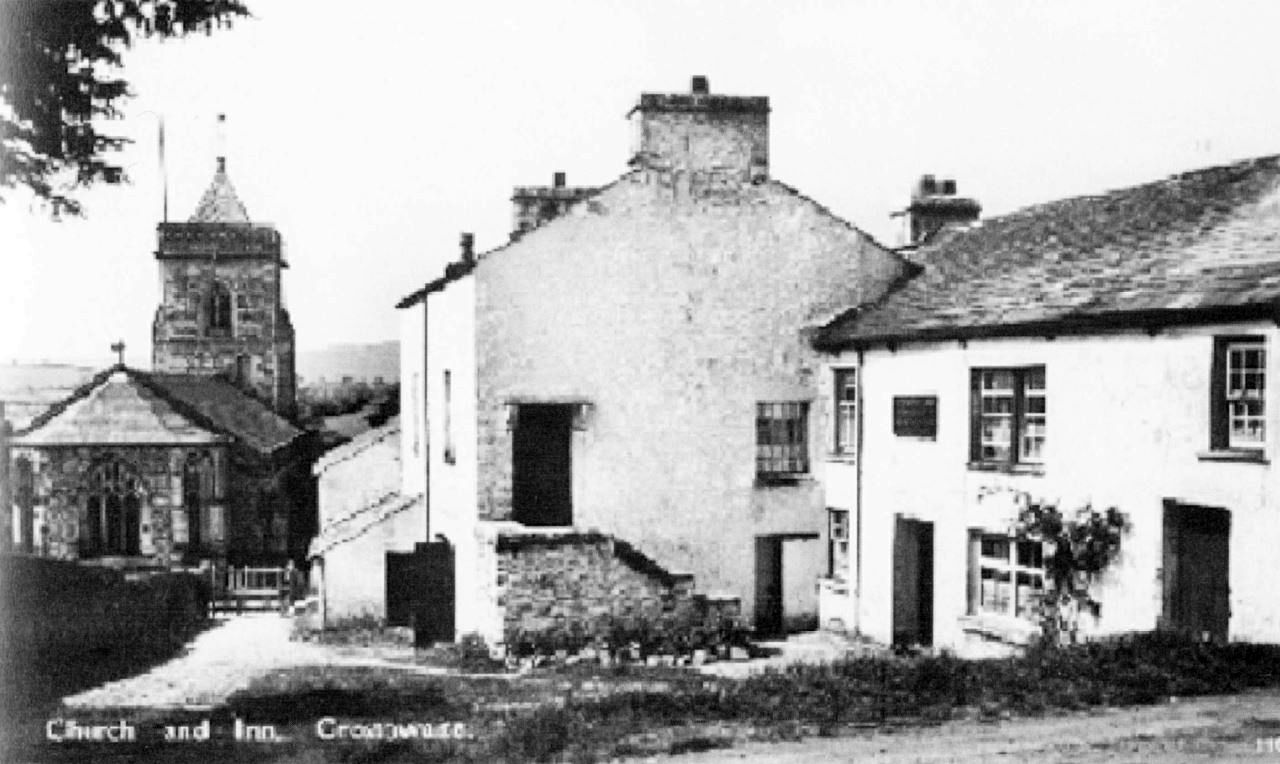 During the Second World War, Captain Stevens was in charge of the Crosthwaite Home Guard as well as running the pub. Another publican was Stan Johnson. He had previously lived at Endmoor, where he had looked after Frankie, a little boy evacuee. He grew up to be the singer Frankie Vaughan! In addition to his duties at the Punch Bowl, Stan ran a taxi service for Crosthwaite children, attending the Lakes School. On their retirement, Stan and his wife built the bungalow next to the Punch Bowl.

In the early days it was very much a local pub and one of the regulars was Robert Clarke, known as "Blind Bob". Not only could he find his way to the pub but he was also an accomplished dominoes player.

More recently Duttons Breweries (later to become Whitbreads) owned the inn, but it has had many landlords. They sold the Inn to David Allan, who extended the building and its facilities. Adrian Parr, who lives in the Howe, is one of several owners who have run the pub in the years since David Allan. In 1996 Steven and Marjorie Doherty came to Crosthwaite. Steven had worked for Albert Roux and was formerly Head Chef at Le Gavroche in Mayfair, London, before deciding to branch out and run his own enterprise. Since then, the Punch Bowl Inn has been voted "Lake District Pub of the Year" and ranked as one of the top ten pubs by "Which" magazine. Steven has also been awarded "North West Chef of the Year" by Life magazine. The pub has been a recipient of numerous other awards and is featured in most of the influential pub and restaurant guides.

THE PLOUGH INN AND THE LYTH VALLEY 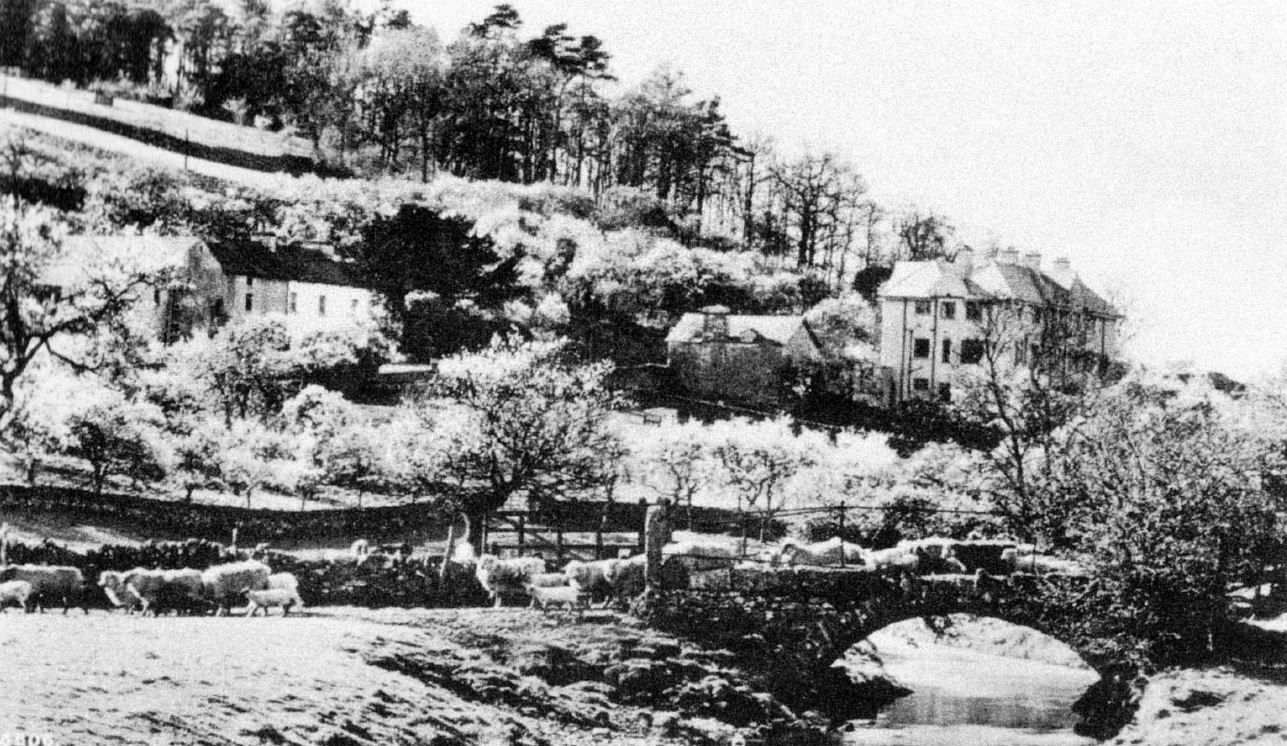 The Plough Inn was a "Drovers' Inn" in the 19th century. The track across the valley, next to the present day Lyth Valley Hotel, was the first safe crossing over what was a tidal river flow. Drovers driving their sheep to market in Lancaster stopped off at the Plough for refreshments.

In the 1881 Census, George Hayton, with his wife Mary Jane and sons William and Edward, was the innkeeper. At the beginning of the 20th century George Park was the licensee. He was Herbert Park's grandfather. Herbert tells of family life at the Plough in the chapter on "Characters".

In 1923 the Hunt Ball was held in the barn next to the pub. Sam Strickland and the Inmans provided the music. In that year Mr and Mrs Tolson took over the running of the pub. He paid £800 for the inn and spent £300 on improvements. The Property Board wanted to make the inn redundant, as so few people used it, but Mr Tolson, having invested in the business, complained that they had chosen quiet times to count the customers. In 1927 the Tolsons moved the premises to buildings across the road, to accommodate road widening. The original Plough Inn was knocked down. In March 1937, these buildings were destroyed by fire. The Tolsons escaped unhurt. During their time at the Plough the couple had numerous disputes with the Licensing Authorities over drinks being sold out of hours and were fined sums ranging from £12 to £25! In 1937 the Westmorland Gazette reported that the Compensation Board felt that Mr Tolson was too old, at 84, to run a bar. In his defence, he stated that as a former engineer in Canada, in charge of 300 to 400 men, he was more than capable. His application for a licence was turned down! 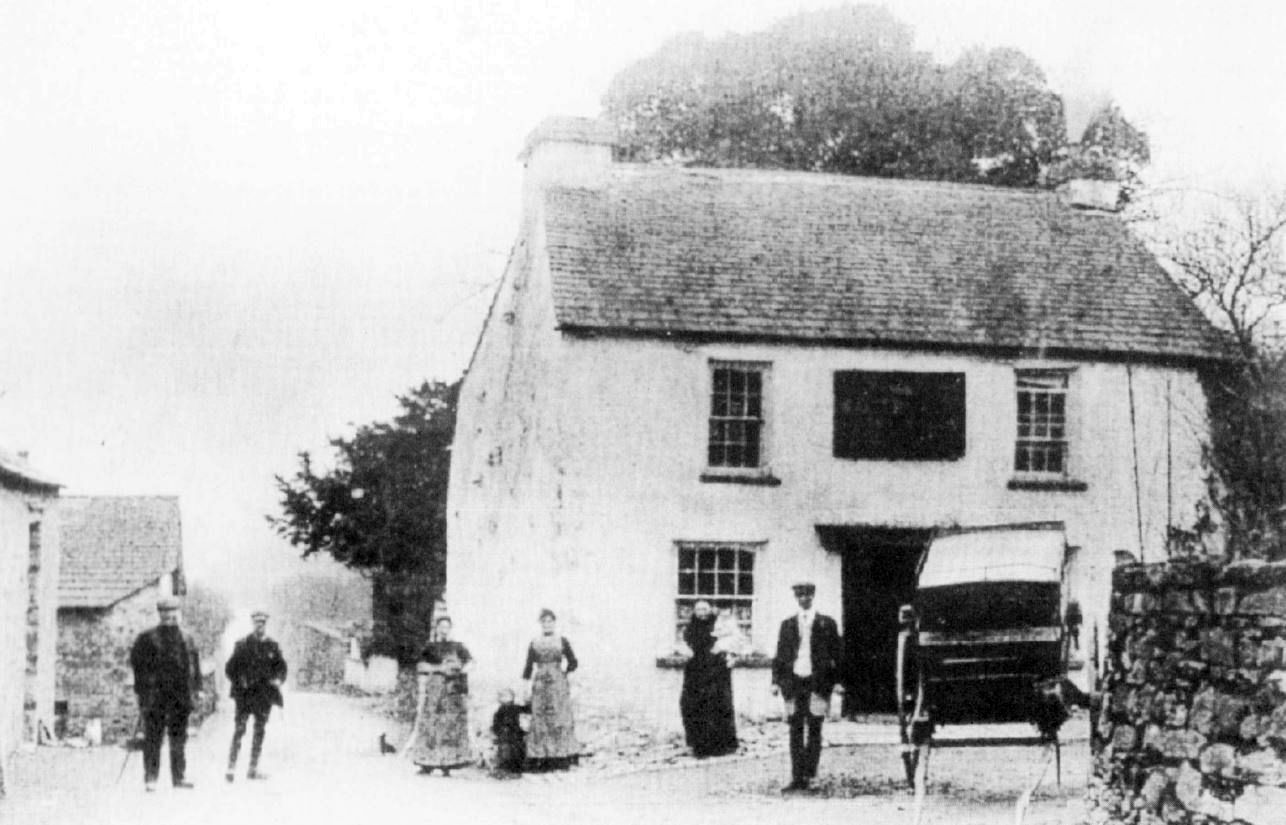 Plough Inn and the Park family

In 1938 a new purpose-built hotel/pub was erected across the road and the Plough Inn became the Lyth Valley Hotel. The motor car and early tourism were targeted by the new business. Petrol pumps and a garage catered for this trade. Smaller bedrooms facing the road were occupied by the chauffeurs, whilst the larger rooms, with beautiful views over the valley, were taken by the "toffs"! Prior to the Kendal bypass, the A591, this road through the valley was the route into the Lakes from Lancashire.

In the early days the Crosthwaite Sports used to be held in the field behind the hotel. Spectators sat on the slopes, in a natural amphitheatre, to watch Cumberland wrestling and other events.

In 1974 George Doodson, the present chef/proprietor of the Lyth Valley, bought the hotel. He had trained in London and the South ofFrance. He made major changes to the structure of the building, also installing central heating and redecorating the rooms. His aim is to provide first-class food in a restaurant setting, whilst retaining the pub atmosphere in the bar area.

The Damson Dene started life as a farm built by Mr "Pont" Pearson at the turn of the 20th century. He had lost his previous home in a drunken bet and built New House to replace it.

Damson Dene as a Youth Hostel

Its use as a public building started when Miss Jennie Holme opened the buildings as a hostel for the C.T.C. (Cyclists' Touring Club). She called it the Damson Dene. At first, it was just for men, but when women started turning up, they had to have a dormitory, too. The bicycles were housed in a wooden hut and the shippon became a girls' dormitory.

The Youth Hostel Association took over from the C.T.C. In the 1960s, water was laid on, mainly for the expanding caravan site across the road. In 1970 the Y.H.A. were still using it. Mr and Mrs Kershaw ran the hostel and advertised ham and eggs, served in a wooden hut café.

After the Y.H.A. it became an hotel and, over the years, the buildings were gradually extended and joined together. An indoor swimming pool and leisure complex were built. In the 1990s a dentist and his wife bought it. They only remained there for a short while. They applied to the planning authorities to turn the hotel into a school for girls, deprived of educational opportunities. There was opposition to the plan locally and it was turned down.

It was some time later that the Methodist Holidays Association bought the hotel. In accordance with their rules it was teetotal, at first. They made a little room into a chapel, for religious services and the occasional wedding. The conference trade received a boost, when the hotel made history, by becoming the first Methodist establishment to serve alcohol.

In 2000 it was bought by local hoteliers Jonathan Denby and Margaret Nicholson and forms part of the small Lake District hotel chain, Lakeside Inns. The modest farmhouse has grown into a 37 bedroom, 3 star hotel and leisure centre. 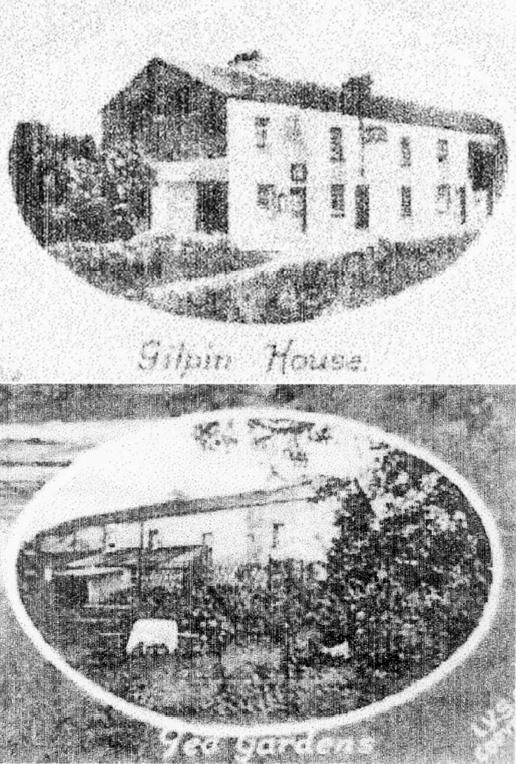 The inn has served a variety of different functions. A former owner believes that it was a coaching inn in the parish of Heversham in the 17th century and that it had to be closed sometime in the 19th century, as it was being used for "immoral purposes"! Certainly in 1861 it was called Bridge Inn and Tom Powley was the "victualler". In 1872, the Westmorland Gazette reported on the sale of "farm and innkeeper's plant". The farm buildings are now the cottages, which stand next to the inn. At the beginning of the century Charlie Shaw lived there. He was a peat salesman, carrierand shopkeeper. His daughter Hannah, who became Hannah Withers, inherited it. She witnessed a fatal car crash in 1915, at Bridge End.

The Powell family lived there during the Second World War and in part of the premises had a shop selling sweets, cigarettes and a few goodies, which were very welcome during a period of rationing. Later the family emigrated to Australia.

Mr and Mrs Tyson, the next owners, enlarged the shop and opened a transport café. There was a full size public weighbridge next to it. On one occasion, a large transporter, with a heavy load from Vickers in Barrow, became bogged down in the car park. This happened because the water table is so close to the surface.

A succession of owners and tenants followed, until David Allan purchased it and re-established it as an inn, converting and extending the building. He sold the inn to Tetleys Brewery Ltd and Mary and Keith Watson and family took over as tenants. They completed the alterations and ran the Gilpin Bridge as a pub/restaurant. Three years later, they purchased the inn from Tetleys and made it into a free house. It was not until 1983 that they sold it to Mr and Mrs Duddle. They added on nine bedrooms to the inn. Shortly afterwards they sold it to Mr and Mrs Council and family, who ran the Gilpin Bridge Inn for a few years. Finally it was sold to Robinsons Breweries. 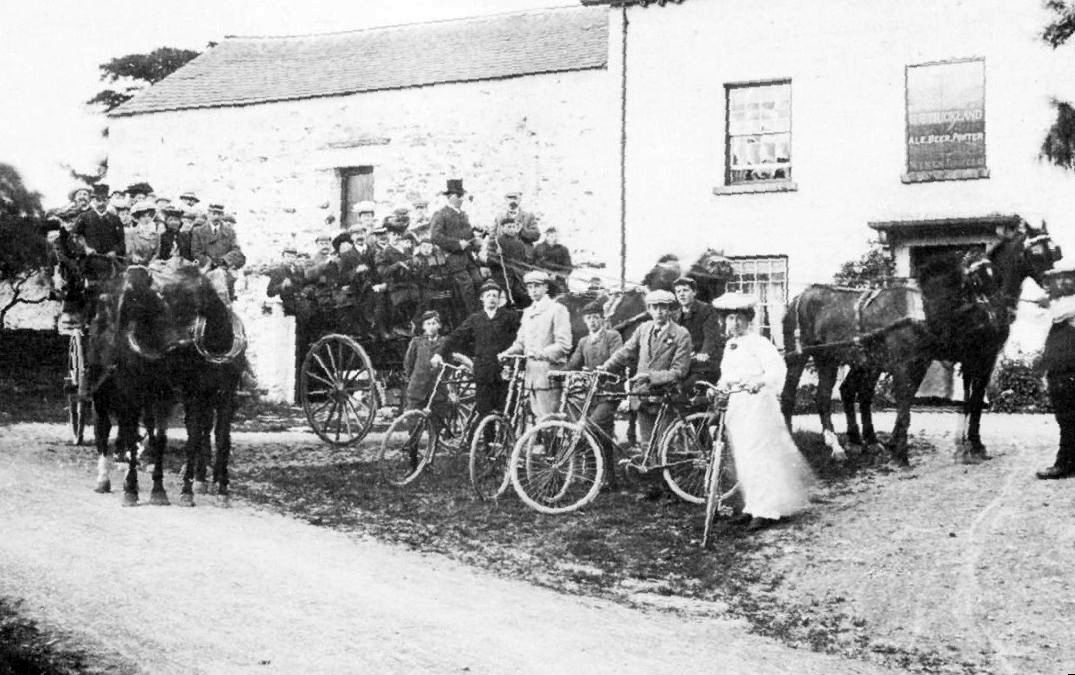 The earliest part of the Hare and Hounds may date from the 17th century. In 1968, it was a tiny pub, with a bar, a snug and another small room, with a dartboard in it. Open coal fires warmed all the rooms. The toilets were outside. At one time the pumps were so slow that the first pint had been drunk before the second was poured! Peter Thompson, the former Liverpool and England footballer, bought it in 1991, modernising and extending it to its present size, as an hotel and pub/restaurant. It is owned now by Honeycombe Leisure.